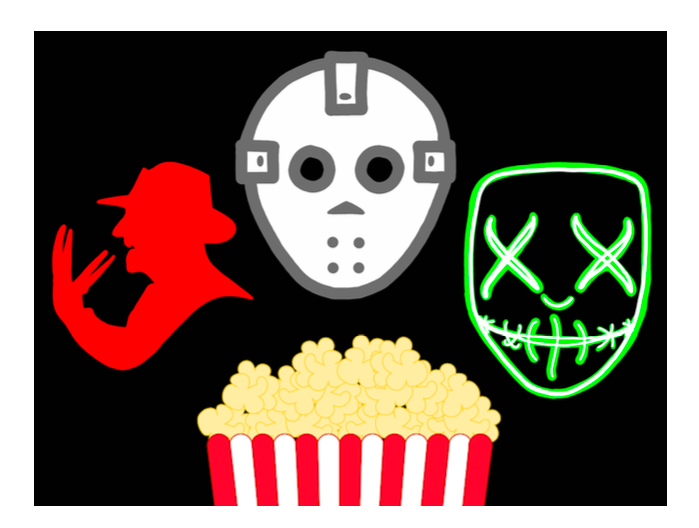 Are you in the mood to watch something scary? Here are some of the best horror movies.

With Halloween right around the corner, everyone is in the mood to watch something scary to get them in the spooky mood we all know and love. If you are struggling to figure out what to watch, here are the top ten best horror movies. This list is not only based on my own opinion, but also the opinion of one of my favorite long time horror movie buffs: my Aunt Shannon.

The movie follows Jason, a madman and serial killer, as he haunts Camp Crystal Lake and the surrounding area, trying to kill any teenager he encounters to avenge the death of his mother, Pamela Voorhees. Jason is known for his iconic hockey mask, which can be found at every costume store during Halloween.

On Halloween of 1963, a six year old boy named Michael Myers brutally murdered Judith, his 17 year old sister. He was locked away in prison for 15 years, but on Halloween of 1978, while being transferred for a court date, Michael Myers, now 21 years old, steals a car and escapes. He returns to his quiet hometown of Haddonfield, Illinois, where he looks for his next victims.

This movie follows Freddie Krueger, a murderer who was burned alive by the parents of his victim. He returns to haunt and kill the teenagers of Springwood, Ohio in their dreams, which ends up killing them in real life.

Jack Torrence, an aspiring author who is struggling with a writer’s block, brings his family to the Overlook Hotel, where he got a job as a caretaker for the hotel during the winter. His son Danny discovers that he has a rare psychic gift called “The Shining.” Danny meets Mr. Hallorann, the hotel cook, who warns him about Room 237. While Danny begins to have visions, Jack slowly goes insane in the hotel, while the voices in his head demand him to kill someone.

After two men finally regain consciousness, they soon begin to realize that they have been trapped by the serial killer known as “Jigsaw.” They have to solve the puzzle Jigsaw has created for them in order to live, while one of the victim’s daughters and wife are forced to watch them trying to survive.

Charles Lee Ray, a murderer that was dying, uses black magic to possess a doll named Chucky. When a boy named Andy receives the doll as a birthday present, Charles continues his murderous spree, killing Andy’s babysitter. Andy tries to tell adults that his doll is alive, but no one believes him until it is too late.

Two paranormal investigators attempt to help the Perron family, who had moved into an old Rhode Island farmhouse that seemed to be haunted by a dark spirit.

While high school students are getting ready to go on a class trip to Paris, Alex Browning sees the plane explode just after they leave the ground. Alex tells everyone that the plane is going to explode, but only him and seven other students decide to get off the plane. After watching the plane explode, they soon begin to realize that they have cheated death. Little did they know, fate would be catching up to them, one by one.

Once a year the government starts the Purge, an entire 12 hours where all crimes, including murder, is legal. After the wealthy Sadin family decides not to participate, they lockdown in their house. They struggle to survive as a murderous group of people outside begin to attack the home after the family decides to protect one of the group’s targets.

The movie follows Shaun, an electronic store employee with an uneventful life, who is unaware that a zombie apocalypse is happening around him in North London. When Shaun and his friend, Ed, finally realize there is a zombie apocalypse, they do everything to save his girlfriend and mother. They struggle and find themselves taking refuge at an old pub, hiding from every zombie coming to eat them.