The girls varsity basketball team won their third straight game Wednesday by the score of 64-43. 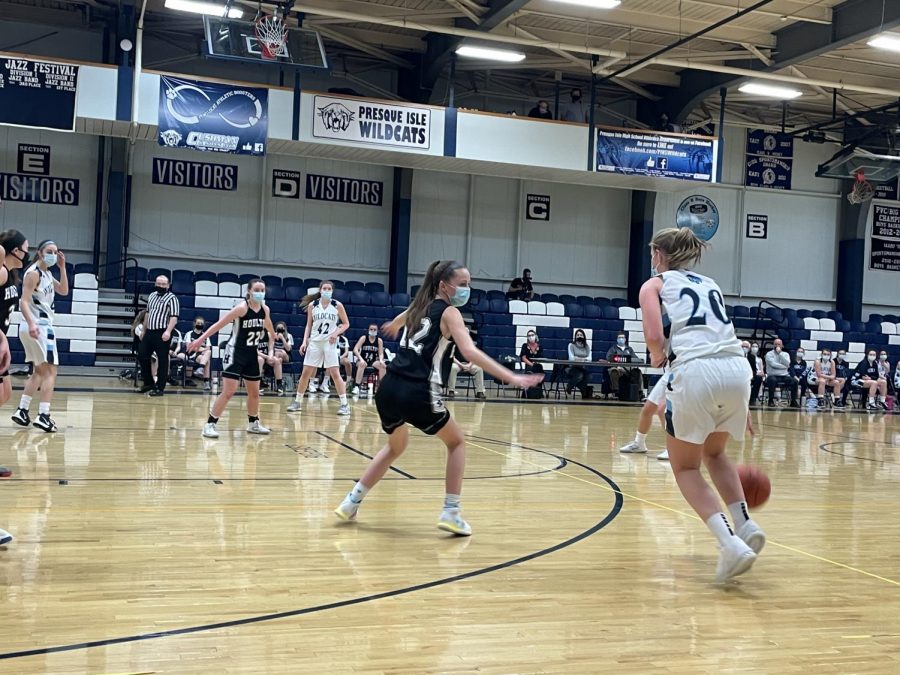 Sophomore Anna Jandreau looks for options on offense during a January 2021 game against Houlton.

The direction of this game was obvious from the opening tip, or should I say coin toss.

Presque Isle, who entered the game 2-0 on the season after both home and away wins over Houlton, came out of the gate firing, outscoring the Vikings 18-6 after the first eight minutes on the back of three straight threes from senior Hattie Bubar.

It would be the same story, different quarter for the Wildcats in the next frame, as they would continue to run up the score to the tune of 24-6 before another Caribou shot found the bottom of the basket. They would add another 15 points to end the half with a 24 point advantage.

Both teams would go ice cold from the field to open the second half, neither squad registering a point until sophomore Anna Jandreau knocked down a shot from beyond the arc nearly four minutes in.

The Vikings would tack on some points as the clock ticked down to make the score more respectable, but ultimately, every facet of the contest was dominated by the Wildcats, who came away with a 64-43 win at home.

“I thought we had a lot of energy and played good defense,” said senior Meg Casavant following the win. “We also had a variety of players shoot the ball really well, and as long as someone new steps up every game, I think we’ll be pretty unstoppable the rest of the season.”

Junior Sadie Lapointe led the team with 11 points on the night, while Jandreau and Faith Sjoberg also tallied double digits with 10 as the varsity girls improve to 3-0 on the year.